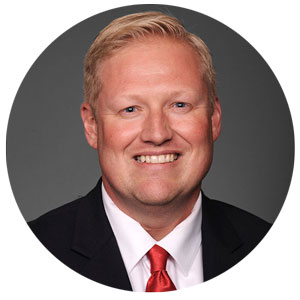 Every lesson that Cheyne Day taught on the Sermon on the Mount has in some way applied to what Oklahoma senators and representatives were grappling with that week.

Recently teaching on the Beatitudes, Pastor Day quoted Jesus in Matthew 5:37, “But let your statement be, ‘Yes, yes’ or ‘No, no’; anything beyond these is of evil.”

“I spoke about the importance of letting your words be true and I said, ‘Believe it or not, sometimes in the political realm, people lie’ and they were all astonished to hear that!” he quipped. “After the study, several senators told me they wished everyone in the capitol could hear that. And that is the ultimate goal, to get the Word out with the printed Bible studies and to create additional ministries.”

In 2019, his first year as ministry leader, Pastor Day concentrated on the senate study which is attended by up to 30 members. He is making plans to expand a house ministry with the approval of the capitol chaplain who is currently leading the study. Pastor Day has also set his sights on creating a ministry for constitutional officers and the judiciary after meeting with a supportive judge.

In the latter part of last year, Pastor Day’s wife, Misty, who is gifted in administration and hospitality, joined as ministry partner and the two have been making the five-and-a-half-hour drives every week from their home in Arkansas to the Oklahoma capital.

Oklahoma is Pastor Day’s home state and the family plans on moving back there after the couple’s son, Calvin, graduates from high school later this year. After the move, Pastor Day will make the five-and-a-half-hour drive back to Arkansas where he will begin a ministry to legislators in that state. The ultimate goal is to find a Bible-teaching evangelist to lead the Arkansas ministry, but until that happens, Pastor Day will serve both states. In the meantime, he is working to raise funding for the self-supporting ministry leader position so he may work full time in ministry.

The couple says it’s been a blessing to work together in ministry. “We feel we are positioned in this place for such a time as this,” Pastor Day said.

If you wish to support Pastor Cheyne Day and the ministry in Oklahoma, learn more at capmin.org/oklahoma.