News and Views From Capitol Ministries®
You are here: Home / Ministry Updates / Pastor Who Once Served in Local Government is Taking Word of God to Oklahoma Legislators Pastor Ray is replacing Cheyne Day who has led that ministry since 2018. Pastor Cheyne will continue to lead—and now singularly concentrate on—the weekly Bible study ministry to legislators in neighboring Arkansas which he has led since 2020.

Before Pastor Cheyne, the Oklahoma ministry had been led for five years by Dr. Doug Melton who stepped down to join the Southern Baptist Convention’s Board of Trustees for the International Mission Board.

With a passion to minister to public servants, Pastor Ray is excited to lead a ministry that had previously been led by two of his closest friends. 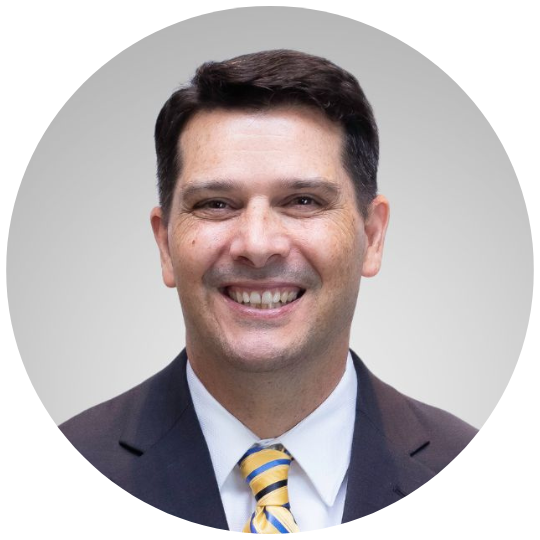 “Cheyne and I grew up together and went to seminary together, and Doug is a very good friend,” Pastor Ray said. “It’s a true pleasure to follow them in this ministry.”

Pastor Ray is senior and founding pastor of Edmond Community Church in Edmond, Oklahoma. His wife, Christina, is a former elementary school principal and current children’s minister at the church. The couple has three sons.

Before that, they planted The Church at Sun Valley in Buckeye, Arizona, a Phoenix suburb. The influence the church had on the community inspired the mayor to ask Pastor Ray to run for city council.

It was while serving as a Buckeye city councilman that Pastor Ray learned the benefit of Christians serving in office and the advantage of ministering to all public servants.

He recalls a significant moment during deliberations on a particular issue. A fellow councilman who had claimed to be an atheist asked Pastor Ray how he was voting and what the Bible said about the issue.

“I explained my reasoning to him through Scripture and he said, ‘That’s good enough for me.’ He changed his vote, and that turned the tide on the issue for the whole commission. The vote was unanimous.”

“While serving in office, I saw I had a role in how God shaped policy through people. It was a moving lesson that left a strong impression.”

Pastor Ray also shared his faith with those who worked at city hall. “I was a pastor who was also a politician, so it was not unusual for the city manager, attorney or other staff to come to my office and ask, “May I have my pastor for a moment?”

“Even in government, people are people with real problems and seek the Lord’s leadership and help for their lives. My goal was always to help move people closer to and further along in their relationship with the Lord Jesus Christ.

Pastor Ray served as city councilman from 2010 until 2016 when he stepped down to run for the U.S. House of Representatives, a race he ultimately lost.

Pastor Ray strongly believes that Christians must be engaged in the political process. Throughout our nation’s history Christian pastors and believers have served in political office. However, in recent years a disturbing and unbiblical directive has been issued from many pulpits – that politics is evil and Christians should not become involved.

“For generations we have held back some of our best people who sensed a call into politics,” Pastor Ray said. “As a result, we have experienced a great void of Christian influence on our society. It just wasn’t supposed to be that way.”

“So much was lost during those years. We need statesmen to go back into that world, and we need missionaries to go in and support them. It’s a battleground for truth and ideas and its full of lost people. And it should not surprise us when lost people act like lost people.

“We desperately need to provide a Christian missionary presence to help the lost in the political world not only come to know the Lord, but to teach the truth and help them understand that they are there to serve the Lord’s purposes.”

“We can’t go in swinging. We go in not with battle axes, but as salt to push back the corruption and light to illuminate the darkness. Salt and light will always have influence that impacts lostness. We go there faithfully to serve the Lord. As God said, love never fails. We start there. Love your neighbor as yourself.”

Pastor Ray will assume the ministry this month and will begin leading a Bible study on Daniel, a statesman who knew how to represent God’s will to those in office. “Daniel was winsome yet mighty at speaking truth to kings that God is sovereign, that He is the One on the throne.”

If you wish to support Pastor Ray Strauss and his ministry in the Oklahoma Capitol, click here.